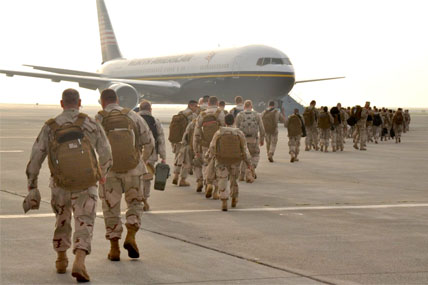 After years of rhetoric and assurances by our President and other leaders that there would be a draw down or a removal of troops in Iraq and other war fronts, the truth has revealed that the wars and occupations are still ongoing. Americans wanting some reprieve from these harsh economic times continue to find themselves sacrificing because of endless war that has seriously affected the US economy.

Americans are weary. They want their loved ones home, jobs, a robust economy, peace. None of this can happen when our government spends trillions on endless war. The total numbers of the deployed are being shifted constantly and are often not noted by the national corporate media.

Even more troops have been deployed to Iraq this week and will be permanently stationed near Baghdad. They are 1000 paratroopers from the 82nd Airborne’s (Panther) 3rd Brigade Combat Team. They will be joining over 250 other troops from their Brigade who provide security to US personnel.

“We’ve seen the impact of DAESH (IS or ISIL) over the last year and a half, not just on Iraq, but on the region,” the commander, Colonel Curtis A. Buzzard said. “It’s clearly an existential threat. It’s an absolutely brutal element that has impacts all across the region and instability in the region and you can see that clearly in Syria, Iraq, potentially Libya and Yemen,” he continued. “The world can’t stand by and watch.”

Currently the US has more than 2,100 US troops stationed in Iraq and President Barack Obama has authorized the deployment of up to 3,000 US troops to that country.

In another war front, four hundred trainers are being deployed to Turkey, Qatar and Saudi Arabia this spring to aid the moderate Syrian opposition effort. Coalition partners are also expected to deploy some of their own troops and advisers to assist with this effort.

The US Government has to start considering the consequences or the “blowback” if troops are going to continue to be deployed anywhere. The question that needs to be asked is; are the actions of ISIS/ISIL/IS/The Islamic State the consequences of BLOWBACK? The US leaders who send our young people to war need to consider that very possibility.

In the meantime, the Peace Movement is being resurged. Cindy Sheehan, the Peace Mom and Host of “Cindy Sheehan’s Soapbox,” an online weekly radio show has posted a press release for an event being organized now. This event will take place in Washington, DC on March 18th through the 21st, 2015.

“Organizing against the wars has been challenging during the Obama administration because so many people who would identify as ‘antiwar’ misplaced a lot of hope in Obama ending the wars. As a matter of fact, Obama has expanded the wars abroad, drone bombing, assassinations of US citizens without trial, and the police state here in the states. It’s time to reclaim our principles as members of a global community and join together in Washington DC and stop giving Obama a ‘chance.”